Have you ever tried the method of planting by the moon? by Sandy Hollingsworth

Raden Pedia
0 comments
Home Have you ever tried the method of planting by the moon? by Sandy Hollingsworth

Have you ever tried the method of planting by the moon? Although most scientists have much skepticism since scientific evidence of the moon’s influence on plant growth is lacking, it is intriguing and has been practiced by believers for centuries. A class at the past Timberline Gardens in Arvada inspired further pondering of the anecdotal evidence. The teacher had practiced these methods for decades and was a true believer reporting measurable differences in seed sprouting successes by their growers. 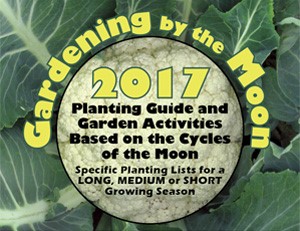 Planting by the moon is a theory by which gardeners plant on dates based on the phases of the moon and its purported influence on water in the soil and plants. The theory is coupled with the moon traveling through each of the twelve zodiac signs staying in each for two or three days, then these dates are used for planning. Water and earth signs are considered “fruitful” days to sow, while air and fire signs are considered “barren” days. You can decide what you think as you read references such as http://farmersalmanac.com/calendar/gardening/  and www.Gardeningbythemoon.com which has detailed explanations of lunar cycles and some research of the influence of the moon on the moisture in the soil and test plantings of root and leafy vegetables during lunar planting phases. While you are reading, you can compare Scientists’ findings such as NASA’s Goddard Institute which concludes that the moon phases effect on soil temperature and moisture content is not documentable and the gravitational pull is at a smaller level than would affect any biochemical processes. Is it our gardeners’ hopeful optimism? At the very least it is fun winter reading.
In general, the first quarter of the moon is the believed by Practitioners to be the best time for planting vegetables that produce above ground edible parts and its seed outside the fruit such as broccoli, kale, chard, spinach, parsley, lettuce, and salad greens.
In the second quarter until the full moon, gravitational pull is less, but the moonlight is strong, thought to create strong leaf growth. You’d plant vegetables bearing seed inside the edible fruit and fast germinators such as beans, peas, and if you have the right growing environment tomatoes, cucumbers, melons, eggplant, peppers and squashes.

In the third quarter following the full moon, gravitational pull is high but the moonlight is decreasing, putting energy into plant roots so plant root crops such as beets, turnips, carrots, potatoes, radishes, garlic, and onions are best. It is also believed to be good for planting perennials, biennials, flowering bulbs and transplanting because of the active root growth.
In the fourth quarter and the new moon, Practitioners believe that the lunar gravity creates balanced root and leaf growth so it best to let plants be and do other garden tasks like tilling, pruning and amending. Seeds planted on poor lunar planting days are said to rot and not germinate.
Even the Farmers’ Almanac website states that you should talk with your local greenhouse or agricultural extension office for the optimal window of time within which to use these gardening by the moon dates since, while consistent across all growing zones, the recommended dates are still "weather permitting. We mountain gardeners are primarily in zone 3 and our season is considered “short”. You might try starting seeds indoors using the moon phases then plant outside when our weather and soil warms. Whatever you decide, happy gardening!