Harison’s Yellow Rose – an Enduring Pioneer by Melissa Baynes
Rosa x harisonii Rivers [foetida × spinosissima]
Men packed tools, provisions and practical provender, the women; Bibles, quilts and their precious roses.
They were the keepers of memory, carrying the stories of their old homes
that would become the new traditions of the territory....
With her rose she shared water while crossing the alkali plains.
In the chill Blue Mountains, curled in a common blanket, she kept her rose from freezing.
Finally, on that great day of arrival on her donation land claim,
she would plant her rose;  a symbol of determination and endurance.
Some twenty varieties of roses traveled across the trail... to be planted, watered, cherished and shared.
-excerpt from the book "Hatchet, Hands and Hoe" by Erika Calkins 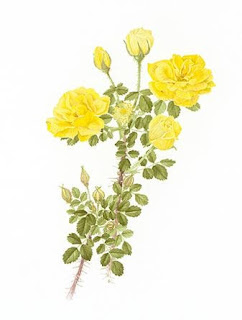 Although my love of plants leans towards our mountain natives, I love the history and stories behind the Harison Yellow Rose, which can be found growing wild and in gardens throughout our mountain communities.  As you drive through town or the countryside, keep a lookout for a beautiful, yellow rose bush.  If you see one, it is likely a Harison’s Yellow… and here is its story:
This lovely rose got its start in the early 1800s.  Richard and George Harison (father and son lawyers) were amateur rosarians and kept a rose garden at their home in Manhattan.  The son, George, was in poor health so he dedicated much of his time and efforts to his beloved garden.  In this garden, the Harison’s maintained a variety of different species of roses including the Persian Yellow (Rosa foetida) and Scotch Briar (Rosa spinosissima).  The Persian Yellow is a native to Iran, Afghanistan and the northwestern Himalayas whereas the Scotch Briar is native to most of Europe.  And, although to this day, the parentage is little uncertain, most experts agree that the Harison’s Yellow is a result of the chance hybridization between the Persian Yellow and Scotch Briar growing in Harison’s garden.
Once this new rose was “discovered”, the Harison’s gave cuttings to several nurserymen including Thomas Hogg and Williams Nursery, but it was William Robert Prince who was best equipped to propagate and distribute this new rose.  It was first marketed in 1830 and was called Harison’s Yellow.  Over time, however, other names have been attributed to this rose and you may hear it referred to by a number of different names including:
Oregon Trail Rose             Pioneer Rose                    Harison’s Gold
Yellow Rose of TX             Yellow Sweet Briar            Hogg's Yellow
Women’s Gold                  Miners’ Wives’ Gold           Crawford’s Rose

In Prince’s 1846 rose catalog, Harison’s Yellow was described as brilliant and beautiful and “a hot sun makes its blooms expand and lose much of their beauty”.  By the mid-1800s horticulturalists and gardeners were treating Harison’s Yellow synonymously with several other roses thought to come from the same original cuttings (e.g., Double Yellow Harison, Hogg’s Seedling Scotch and Williams’ Double Yellow).  There is still some confusion today regarding Harison’s Yellow, these other hybrids and others that arose around the same time in Britain.  Consequently, there are many forms of what is considered to be Harison’s Yellow – some are closer to the Persian Yellow (brighter yellow and fetid) while others are closer to the Scotch Briar (lighter yellow with a pleasant scent). 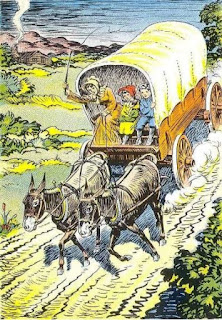 Regardless of its parentage, gardeners cherished this rose from the beginning.  When pioneers began moving west, women would take roots of Harison’s Yellow across country with them to their new homes.  Their methods for keeping the rose alive were ingenious.  Some used tin cans, buckets or tea cups to carry their treasured roses in while others used damp cloths, raw potatoes or their skirts.  Pioneer women often wore linsey-woolsey skirts (made of a coarse blend of linen and wool) and they sewed the roots deep into the hems.  And, as they walked through the prairie grasses alongside their covered wagons, the dew would moisten their skirts and keep the roots alive. 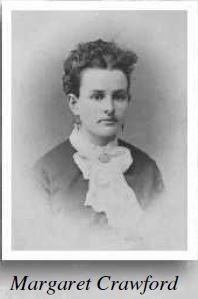 Westerners loved their Harison’s Yellow.  These roses had beautiful blooms, were very resilient, had needle-like thorns that fended off the hungriest of longhorns and, once rooted, were impervious to drought and cold.  Today, Harison’s Yellow can be found growing feral along the Oregon Trail and at abandoned mining camps and homesteads throughout Colorado and the West.  In Westminster, there is a specimen outside the Bowles House that was likely planted in 1875 and believed to be the oldest in Colorado.  And, you don’t have to look far to find Harison’s Yellow growing in our own mountain communities.  Specimens found in Clear Creek County are thought to be traced back to Sedalia, MO when the Crawford family (Steamboat Springs founding family) began their trek west in 1873.  Margaret Crawford dug up her roses and packed them in her wagon for their move.  The Crawfords spent time in the Evergreen / Clear Creek County area and planted some of their roses along the way on their journey.  Many others brought Harison’s Yellow during the gold rush days of the 1860s.  Miners planted the rose throughout the Central City area and plants can still be found growing on the hillsides outside both Central City and Black Hawk.  Today, the Central City Opera celebrates the Harison’s Yellow as part of their annual festival at the opening of opera season.
If you see a wild yellow rose growing wild in our mountain communities, it is likely a Harison’s Yellow.  The rose is bushy with upright, arching canes and can reach 8ft tall by 4ft wide.  It has straight, sharp thorns and forms suckers on its own roots.  The flowers are slightly cupped, semi-double and usually bright yellow with 20-25 petals.  Harison’s Yellow blooms most heavily in cool, dry weather with only a single flush of flowers in spring or early summer.  It is very hardy; it tolerates full sun to part shade, cold, drought, poor soils and pests… perfect for our tough mountain environment.  However, if you are thinking of adding a little history to your garden by planting or propagating this rose, beware!  Although it thrives on neglect, it is notoriously difficult to establish.  It is usually cultivated as an own-root plant but you may need to be patient and make several attempts to get it to establish and survive.  If you (or a friend) don’t have a plant to take cuttings from, nursery-grown plants are available at some local nurseries in the Denver area.
Few plants have such an amazing history.  So, if you happen to spot one when you are out and about, take a moment to stop and smell the roses and appreciate the rich lore of the Harison Yellow!  It is truly an enduring pioneer. 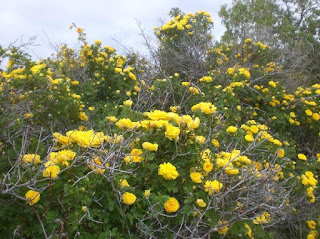 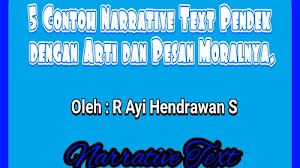