Fighting Rust in my Backyard

By Vicky Barney, Steamboat Springs
The serviceberry bushes in my backyard look unhealthy.  The leaves are covered in brown spots and the berries look very dry.  Since I love the bushes because they feed the birds and the occasional bear, I decided to investigate the problem.
Serviceberry and chokecherry bushes dominate the open space in my neighborhood.  In previous summers, a few brown spots were noticeable on some serviceberry leaves, but the bushes looked healthy overall.  This year, though, entire bushes look sickly and berry production has been poor.  Some research indicated that the bushes might have a fungus, if there was something more than brown spots on the leaves.  On closer inspection, I saw the brown spots had tendrils growing out of the back sides of the leaves, another indication of fungus. (See photo)  I took a branch from an infected bush to Barb, Christine, and Rozanne at the Master Gardener Office Hours last Thursday to confirm the diagnosis I suspected:  Rust.
Rust, or Gymnosperm Rust, is the name given to the Gymnosporangium fungus.  There are a number of species of fungi in the Rocky Mountain area, differentiated by the plants they attack. All require two host plants to complete their disease cycle.  One host is a juniper (including Rocky Mountain juniper, common juniper, and eastern redcedar) and the other a Rosaceous species (including apple, crabapple, hawthorn, Juneberry, and serviceberry).  My species of rust appears to be one with a serviceberry host.
As for the juniper host, the obvious candidate is a juniper tree hidden among the bushes on my property.  A slim tree about twelve feet tall, it is the only juniper tree in the area.  It appears healthy and has no noticeable fungus, but after studying the photos in an article about rusts (https://www.fs.usda.gov/Internet/FSE_DOCUMENTS/stelprdb5347332.pdf), I found small galls on a number of its branches. 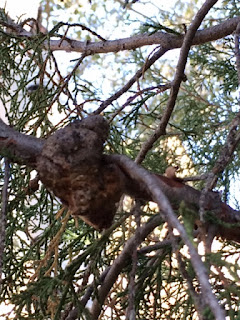 So how do I manage rust? I have a few choices.
1.     Ignore it.  Rust rarely kills the host plants and is less aggressive in dry years.  However, it may make the plants more susceptible to other diseases and in wet years, the fruit will be adversely impacted.
2.     Use chemicals on the serviceberry bushes to break the disease cycle.  Spray the affected serviceberry bushes with fungicide in the spring at seven- to 10-day intervals beginning at blossom time.  The process will require professional help.
3.     Break the disease cycle mechanically on the juniper tree.  Prune out the juniper galls (where gelatinous spore horns emerge) in late winter or early spring.  Given the size of the tree, this option, too, will require professional help.
For more:  http://planttalk.colostate.edu/topics/insects-diseases/1450-juniper-hawthorn-rust/
To ensure the serviceberry bushes stay healthy and berry producing, I want to break the disease cycle.  I do not want to use chemicals as that will adversely affect the wildlife.  Neither do I want to spend the time and money pruning small juniper galls.  In hindsight, the best solution would have been to plant the juniper in another neighborhood, well away from any plants in the Rosaceous species. (A two mile separation is recommended.)  The tree would have grown beautifully in another location.
Thinking about location led to the realization that the juniper tree is not a vital part of the landscape and its removal will break the disease cycle immediately.  This tree has value, consuming carbon dioxide, producing oxygen, and benefitting wildlife, but the disease it is hosting is impacting  the health of dozens (maybe hundreds) of serviceberry bushes that also have value.
Choosing to cut down a tree is a surprisingly difficult decision.  Eliminating one host, though, and thus eliminating the fungus, will encourage a healthier landscape and a happier wildlife population.  I hope.
Vicky Barney gardens for wildlife and is a member of the Master Gardener Class of 2011.