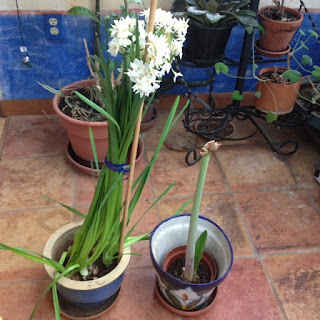 The holidays are behind us, and many of us now have pots of withering Amaryllis and paperwhites.  While it’s harder than I consider worth it to get paperwhites to rebloom again in our climate (they are not hardy for planting outdoors), don't throw out your Amaryllis.  With a little care, it can bloom again next year --even better than it did this year!
The secret is to keep the plant actively growing after it blooms to recharge the bulb; it takes a lot of energy to produce such big flowers. If the bulb does not produce a flowering stalk the next blooming period, it is likely that has not stored enough nutrients during the post-blooming period.
After the flowers have faded, cut the flowers off to prevent seed set. Only cut the flowering stalk after it turns yellow, a green stalk continues to produce energy for the bulb.  In order to feed the bulb for next year's show, water and feed the plant regularly with an all-purpose houseplant fertilizer. Put the plant in the sunniest possible location for the rest of the winter to encourage strong leaf development. I have found that putting the pot outside during the summer after all danger of frost helps maximize photosynthesis and gives the best results. Make sure to slowly acclimate the plant to full sun to avoid sunburn (gradually increase the time spent in the sun each day for about a week).  I have also noticed that critters don't seem to bother either the leaves or the bulb - a bonus around here.  Remember to feed the plant a few times during the summer in addition to regularly watering.
For blooms in time for the holidays, stop watering in mid-August and bring the pot inside. Let the foliage die back naturally as the soil dries out completely. When the leaves have withered, store the dormant bulb in a cool, dark and dry place for a minimum of eight to twelve weeks. Then, about six to eight weeks before you want the Amaryllis to flower again,  place it in bright light and begin watering again - sparingly at first, so the bulb is not sitting in water.
If you don’t care when it blooms, there is no need to do the fall dormancy protocol. Continue watering and fertilizing the plant, and bring it inside before frost. Keep it in a sunny window, and it will usually bloom sometime in spring. The flowering stalk should emerge with or before the leaves if you have taken proper care of the plant. Watch as the number of flowers on the stalk increases in both number and size as the bulb increases in size.  Over time, the bulb may produce a new bulb, which you can remove and pot up separately. Amaryllis plants bloom best when they are somewhat potbound (crowded roots). They require repotting only every 3 or 4 years. The best time to repot them is after they have gone through a dormant period in the fall. 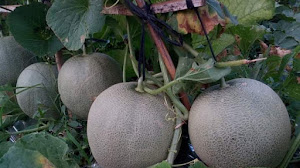