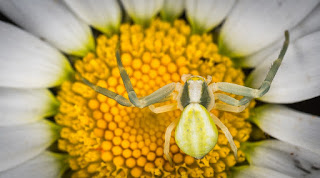 Most spiders are regarded as beneficial and should not be destroyed. Many people fear spiders because of stories or myths about them. Others object to spiders because of their habit of building webs in and around the home.
Spiders differ from insects in that they have eight legs rather than six and only two body regions instead of three. Some spiders spin a web while others do not.
Indoors, many spiders may be found in basements, crawl spaces and other areas where it is somewhat damp. Other spiders, however, prefer a drier situation and can be found in the upper corners of rooms, in attics or in floor vents.

After mating, female spiders lay eggs in clusters called egg sacs. A few species lay their eggs in dark hiding areas and not in a silken sac.
Some female spiders guard their egg sacs; others carry the sacs with them. A female may          produce several egg sacs in her life. Eggs usually hatch into small spiders within three weeks.  Mating and egg laying can occur at any time of the year, depending upon species.

Two species of spiders found in Colorado can be harmful to humans if they are bit.  The black widow spider and the brown recluse spider have poisonous bites. These two spiders are not aggressive and bites are uncommon. Their bites are rarely fatal but can cause serious illness.  Medical attention should be sought in the case of bites from these spiders. 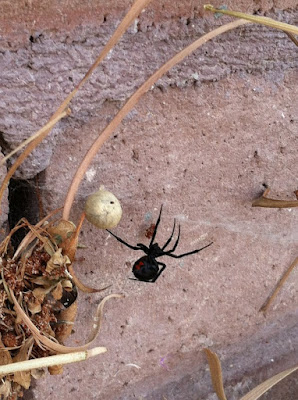 The black widow spider, Latrodectus hesperus, is common throughout Colorado. This spider can be found in undergrowth, under stones, in the openings to rodent burrows, in hollow trees or in any other kind of protected area. Around the home it may be found in garages, window wells, crawl spaces and occasionally in basements. It likes undisturbed areas in and behind objects.  Homes in new developments will be bothered for some time from natural populations in the area.
The female black widow is poisonous, while the male is not. The female is about 1 1/2 inches long. The body, excluding the legs, is about 1/2 inch, jet black or dark brown, and usually has red markings that can take the shape of an hourglass on the underside of the abdomen. The male is smaller with brown markings. The two sexes may be easily distinguished by their sizes and by the pattern of the red marks on the abdomen. 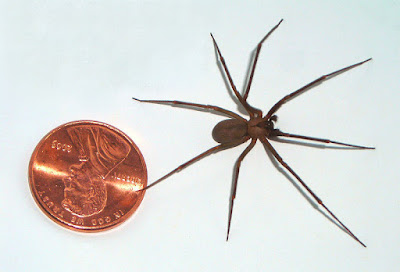