by Ed Powers
As many of our readers know I travel areas of the Rocky Mountains annually and enjoy the abundant flora at all elevations.  I have really fallen love with the Indian Paint Brush flowers.  The plants are simple but the flowers are amazing and they come in several colors. Originally, I thought the different colors were a result of the altitude and soil condition, but I have come to learn each color is a different species. 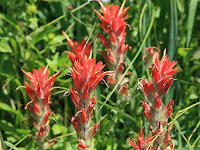 Indian paintbrush flowers are named for the clusters of spiky blooms that resemble paintbrushes dipped in bright red or orange-yellow paint. Growing this wildflower can add interest to the native garden. About the Indian paintbrush, also known as Castilleja, Indian paintbrush wildflowers grow in forest clearings and grasslands across the Western and Southwestern United States. Indian paintbrush is a biennial plant that usually develops rosettes the first year and stalks of blooms in spring or early summer of the second year. The plant is short-lived and dies after it sets seed. However, if conditions are right, Indian paintbrush reseeds itself every autumn. This unpredictable wildflower grows when it is planted in close proximity with other plants, primarily grasses or native plants such as penstemon or blue-eyed grass. This is because Indian paintbrush sends roots out to the other plants, then penetrates the roots and “borrows” nutrients it needs in order to survive. They are hemiparasitic on the roots of grasses and forbs.  Indian paintbrush tolerates cold winters but it doesn’t perform well in the USDA zones 8 and above, which is interesting because I find them above 9,000’ and I can’t seem to grow them in Evergreen, at 7,600’, zones 3 & 4. 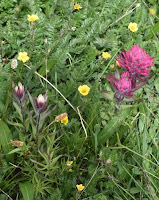 Castilleja, commonly known as Indian paintbrush or prairie-fire, is a genus of about 200 species of annual and perennial herbaceous plants native to the west of the Americas from Alaska south to the Andes, northern Asia, and one species as far west as the Kola Peninsula in northwestern Russia. These plants are classified in the broomrape family. The generic name honors Spanish botanist Domingo Castillejo.

The flowers of Indian paintbrush are edible, and were consumed in moderation by various Native American tribes as a condiment with other fresh greens. These plants have a tendency to absorb and concentrate selenium in their tissues from the soils in which they grow, and can be potentially very toxic if the roots or green parts of the plant are consumed. Highly alkaline soils increase the selenium levels in the plants. Indian paintbrush has similar health benefits to consuming garlic if only the flowers are eaten in small amounts and in moderation.

The Ojibwe Tribes used a hair wash made from Indian paintbrush to make their hair glossy and full bodied, and as a treatment for rheumatism. The high selenium content of this plant has been cited as the reason for its effectiveness for these purposes. Nevada Indian tribes used the plant to treat sexually transmitted diseases and to enhance the immune system. 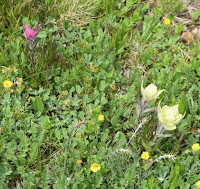 Castilleja linariifolia is the state flower of Wyoming, and will grow well in the Rockies of Colorado.