The Rise of Spruce Beetle in the Colorado Mountains

by Emily Jack-Scott (Garfield County Master Gardener Apprentice)
The spruce beetle (Dendroctonus rufipennis) is currently the leading insect responsible for killing trees in Colorado, having usurped mountain pine beetle in 2012 (2017 Report, CSFS). These bark beetles have swept through hundreds of thousands of acres of forested lands in the Colorado Rockies in recent years. Since 2000, close to 2 million acres have been impacted across Colorado. Counties most heavily impacted between 1996-2018 include Hinsdale, Mineral, Saguache, Gunnison, Conejos, and Rio Grande; each experiencing hundreds of thousands of affected acres. (2018 Report, CSFS)
Spruce bark beetles are a native species, endemic to the Rocky Mountains. In Colorado, the beetles favor high alpine (above 9,000’) Engelmann spruce, but will also attack Colorado blue spruce and Norway spruce, and at lower elevations. At usual low endemic levels the beetles target dead trees, from windfall events or the like. But once they rise to epidemic levels they will attack live trees, initially favoring larger diameter trees (over 16” diameter), progressively targeting smaller spruces down to 3” diameter. Larvae overwinter under the bark of infested trees, emerging as adults and flying to new host trees between May and July the following year. Once they find a new host, adults chew through a host tree’s bark to tunnel around in the tree’s cambium and outer-most sapwood just beneath the bark, creating elaborate tunneling patterns known as galleries. It is in these galleries that they will lay their eggs, which will hatch into larvae in the fall and start the life cycle over again (2018 Report, CSFS; CSFS Quick Guide).
What to look for:
Signs include the small dark brown beetles or white creamy larvae themselves. Symptoms include frass (insect poop, appearing as a fine sawdust from boring activity) collecting in the furrows of bark along the trunk, thin streamers of sap running down the trunk, visible small holes in the trunk with or without pitch tubes (see Figure 3), increased woodpecker activity, and/or the yellowing and eventual dropping of needles. Unlike pines attacked by mountain pine beetle the needles do not turn a vibrant red before falling off. Rather they fade to a sickly green before drying out entirely and falling off over time (CSFS Quick Guide).
Spruce beetle is not confined to forested areas, and therefore should be on the radar of gardeners and landscapers in the mountains. Spruce beetle can sometimes favor trees in landscaped and urban settings, which may be under additional pressures and adverse growing conditions. Other factors that can make trees more at risk are drought stress, recent fires, increasingly mild winter low temperatures, and abundance of spruce in an area (Spruce Beetle UAF).
The Colorado mountains have not only experienced these stressors in recent years, but most recently incurred historic avalanches during the 2019 winter. These avalanches resulted in the disturbance, uprooting, and death of countless spruce, serving as magnets for spruce beetles. This will likely increase spruce beetle pressure in forests and yards of the high mountains that were otherwise minimally impacted over the last few decades (see map below of recent spruce beetle activity in Colorado). 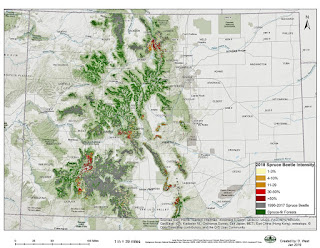 What you can do:
Options for prevention are limited. Pyrethroid insecticides can be sprayed on tree trunks during flight windows (May-July), and very new research is confirming that certain formulations of MCH[S1] [EJ2]  pheromone packets (namely MCH-AKB) has efficacy deflecting beetle attacks. These pheromone packets release a scent that sends a false signal to beetles that a tree of forest stand has already been infested by spruce beetles, so new beetles pass over such trees (Hansen et al. 2019). Once trees have been attacked, they should be felled and either completely removed from a location (including chips and slash), or should be cut and stacked in an area with full sun and covered completely with clear plastic. (Spruce Beetle, CSFS)
Sources
2017 Report on the Health of Colorado’s Forests. Colorado State Forest Service.
https://csfs.colostate.edu/media/sites/22/2018/01/2017_ForestHealthReport_FINAL.pdf
2018 Report on the Health of Colorado’s Forests. Colorado State Forest Service. https://csfs.colostate.edu/media/sites/22/2019/03/FINAL-307714_ForestRpt-2018-www.pdf
CSFS Quick Guide – Spruce Beetle FM-2014-1. https://csfs.colostate.edu/media/sites/22/2014/02/Spruce-Beetle-QuickGuide-FM2014-1.pdf
Hansen, E.M., Munson, A.S., Wakarchuk, D., Blackford, D.C., Graves, A.D., Stephens, S. and Moan, J.E., 2019. Advances in Semiochemical Repellents to Mitigate Host Mortality From the Spruce Beetle (Coleoptera: Curculionidae). Journal of economic entomology.
Spruce Beetle – Trees/Forests at Risk. University of Alaska Fairbanks. http://sprucebeetle.open.uaf.edu/2-module-2/
Spruce Beetle. Colorado State Forest Service. https://csfs.colostate.edu/forest-management/common-forest-insects-diseases/spruce-bark-beetle/
Despite beetle threat, Aspen-area avy debris to remain. Aspen Times. July 2, 2019. https://www.aspentimes.com/news/despite-beetle-threat-aspen-area-avy-debris-to-remain/