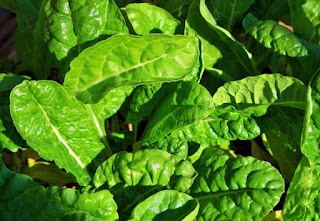 Our hearts and taste buds are gladdened in late spring, as the first leaves of garden-fresh spinach appear. What a welcome treat for salads and many a cooked dish!
After a few weeks of harvesting tasty spinach, however, gardening frustration sets in. By mid-summer when the leaves are either bitter or have gone to seed (bolted), you are wishing for a magic spinach wand to wave over said patch, enabling a longer spinach-growing season. How to plant smart and harvest much of the year?
Spinach seed needs temperatures of 45  ͦF to 65  ͦF to germinate and to produce well. It prefers the cool, sunny weather of late spring and early fall. Any colder and the spinach won’t grow; any warmer and it bolts.
In general, spinach requires rich soil: amend the spinach bed well with compost and/or manure and a complete organic fertilizer before planting. Keep the bed evenly moist and weeded and thin to 2” apart.
One path to earlier gratification—and a longer harvest--is sowing the spinach initially in 6-paks inside. Sow a limited number of seeds in 6-paks inside in late winter (late January or Feb.), transferring them to the soil in a cold frame early in March. The 6-pak spinach should be sown in a sterile, seed-starting medium. Planting small amounts is not an overwhelming task, and, according to gardener Lucy Leske, about 3 dozen plants in a 6-foot row yield 10 servings of spinach and several salads.
Leske suggests that you also plant a small batch of new seeds in the ground in a cold frame in early-mid March—your second planting. By late March, you may direct-sow another row of the same varieties in the garden. Old standards such as Tyee and Melody are seeds of choice for these early, cold plantings.
As soon as soil can be worked—when the soil has dried out and is warmed--sow two small plantings directly into the garden, one in mid-April and one in late April. Because these last two plantings will mature in late June, choose bolt-resistant varieties, such as Indian Summer, Steadfast and Bloomsdale.
After this, hold off sowing for several weeks (May, June and early July) to avoid the hot months. At the end of July and in mid-August, in preparation for a quick fall crop, start more seed in six-paks for transplanting into the garden. If started in a cool spot and transplanted into cool soil, well-watered and mulched, perhaps covered with shade cloth, an all-weather variety, such as Tyee, should yield a satisfying late-summer/early-fall crop.
For the last sowing of the year, in late September, scatter the seed of a cold-tolerant variety over a 3 square-foot plot in the garden. Once seedlings are up and temperatures drop below freezing at night, cover with straw mulch for winter or plant and mulch in a cold frame or greenhouse. As spring approaches, new growth will continually appear at the center of the plants. For early spring spinach, before your new sowings yield, you may harvest these overwintered plants.
Remember to pick the leaves when they are small and preferably pick just a few leaves at a time from each plant. Early thinnings are wonderful for spring salads. For summer's dog days, plant the seed deeper, provide partial shade and water copiously.
Many seed catalogs offer intriguing and varied spinach choices. Most of the catalog descriptions explain whether spinach is bolt-resistant for hotter summer growing or a cool-season variety which can take cold and inclement conditions. One which has caught my eye is Bordeaux Red-stemmed (John Scheepers and Fedco), bred specifically for the baby leaf market. It is quick growing and will yield tender, delicately-flavored leaves in 20-40 days. But it will bolt quickly, so one must keep a watchful eye on the baby plants.
Timing and sowing the correct variety for the season are the keys to successive successful spinach harvests.
Above article is adapted from “Spinach,” by Lucy Apthorp Leske in “Grow: Fine Gardening’s Guide to Vegetable Gardening,” Vol. 5, 2011, p.38.
A small sampling of new and old spinach varieties:
Cooks’ Garden Seeds—cooksgarden.com—“Indian Summer” Hybrid-- very slow to bolt during hot weather, heavy yields.
Fedco—fedcoseeds.com—“Winter Bloomsdale”—Recommended for early spring and fall, tolerates temperature extremes, ideal for overwintering.
John Scheepers Kitchen Garden Seeds—kitchengardenseeds.com—“Bordeaux Red-stemmed”—new Danish-bred for baby leaves. Cool-weather variety. Although rapid-growing, it bolts quickly, so harvest young, tender and small; “Bloomsdale Long Standing”--heat-tolerant; “Malabar”—not a true spinach, but a vining spinach-substitute, tolerates up to 90  ͦ+ F. heat, beautiful red stems makes it useful as ornamental vine.
Johnny’s Selected Seeds—johnnyseeds.com—“Corvair”--Organic smooth-leaf spinach for spring crops, slow bolting.
Seeds from Italy--www.growitalian.com--“America”--bolt resistant and overwintering; “Gigante d’Inverno”--certified organic, late fall and overwintering; “Merlo Nero”—overwintering.
Territorial Seed Company—territorialseed.com—“Tyee”—vigorous grower, slow to bolt, all-weather.