I’m nearing the end of my second summer in a passive solar house with an 80-foot expanse of south-facing windows.  At 7,000 feet, where the outdoor gardening season can be fickle and short lived, the idea of stuffing our large window planters with vegetables and enjoying vine fresh tomatoes at Christmas held huge appeal.   Little did I know that I was starting a whole new gardening adventure.
Late fall and my solar palace was bursting with green.  Tomatoes crowded four window bays, cucumbers hung from the ceiling between the kitchen and the window planters, the odor of herbs filled the air in the late afternoon; this was a gardener’s dream!  Or so I thought.  First I noticed the peppers.  Transplanted starts from a reputable grower, they were anemic and the fruit wasn’t developing properly – especially for the amount of warmth and sun they were getting.   Then, the cucumbers between the kitchen and the solar hall declined; I expect some powdery mildew on cucurbits, but the additional shiny sticky coating and spider-webbing was a concern.  My research pointed to white flies, and I tried Neem Oil and another organic pesticide with little impact.
It was Thanksgiving, snow was on the ground yet the tomato vines crowding the windows weren’t freezing.  To provide the interior of my rowdy tomatoes with air and sun, I judiciously began pruning non-bearing limbs and some of the larger leaves.  I started to notice a suspicious shiny coating on the vines…a bit of pruning led to major hacking…and tears.  The leaves at the windows and the window sills themselves were covered with a thick layer of honeydew.  Devastated, I cut the plants down and tossed them into the burn pile.  A week later, kale at the other end of the house was covered with little green critters, stickiness and damage.  I collected a couple of leaves and went over to the extension office to use the microscope. Hmmm…they looked like aphids, but aphids can be species selective.  I didn’t expect all the plants would be attacked.  Our awesome extension agent, Todd Hagenbuch, sent my samples to the CSU greenhouse entomologist and the verdict came back:  Green Peach Aphids – a wee bestie that’s particularly problematic in greenhouses and resistant to chemical pesticides (which I’m not going to use in my living space anyway).  The population was substantial enough that the darn things were reaching the winged adult stage – which explained the movement through the house.  Aphids are blind, dumb, and barely mobile…but allow them to grow wings and watch out! 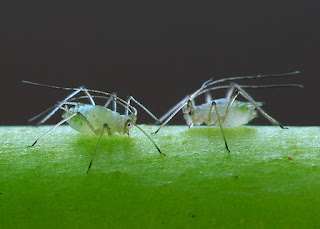 The extension expert sent me a CSU paper on biological control of insects, how they work and where to find them.  I made some calls to ‘insectaries’ and settled on lacewing larvae, an aphid predator.  They come as eggs on cards that are hung near aphid infestations. The adults don’t seem to do well in greenhouse environments, so I would need to keep hanging new cards.  The lacewings worked, but my aphid problem was out of control…now they’d found the bougainvillea!   Desperate, I released two batches of aphidoletesaphidimyza. This is a tiny midge (in the fly family) that flies around laying eggs near aphid populations on the leaves. The aphidoletes eggs hatch into tiny larvae (maggot-like) that scoot around the leaves eating aphids.  Within about a month, there was no honeydew, the new shoots were free of aphids and we could now expect fresh tomatoes and other vegetables.
It has been a fascinating adventure in allowing what happens in nature to work in a home.  The only drawback is teeny little flies that are attracted to my late-night headlamp but it’s a small tradeoff for fresh vegetables all winter long!
Photo by I, Luc Viatour, CC BY-SA 3.0, https://commons.wikimedia.org/w/index.php?curid=3440776