Tips for Success with Wildflower Seed

By Kristina Hughes, Clear Creek County Master Gardener
How many of us have been awestruck by the display of wildflowers in the mountains and said to ourselves "I want to re-create that in my garden!" And how many of us have tried a wildflower seed garden which looked great the first season, but after a couple of years, sort of petered out. 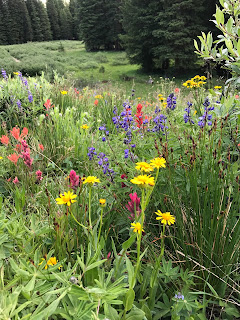 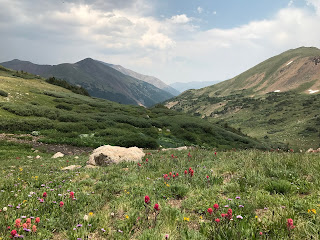 I've seen a number of wildflower seed beds that were wonderful the first season and then after season 2 or 3, became increasingly disappointing. I personally have only seen a few wildflower seed beds that have consistently performed well year after year, and after quizzing some of the successful gardeners I will share what seem to be some secrets to success.
Common Problems
Sowing seeds too late: Most wildflower seeds need a cold period in order to germinate. Sometimes the seed manufacturer has put the seeds through an artificial cold period, but to have the best germination of your seed, sow seeds in late fall or winter.
One or two plants dominate: Frequently after a season or two, just a few plants dominate the wildflower bed. Each garden has a particular microclimate and set of conditions which will favor some plants over others. In a short period those few species will outcompete the species that are less suited to that site. The solution here is to re-seed each year and replenish the diversity of species.
Weeds take over: Weed seeds are present in natural soils and they will happily germinate along with your lovely wildflower seeds. It is extremely difficult to tell which tiny seedling is a weed and which is a wildflower. On their website Boulder-based seed company Beauty Beyond Belief recommends getting rid of as many weeds as possible, by pulling, tilling or spraying, before seeding with wildflowers. According to the website of Applewood Seed in Arvada, after your wildflowers have germinated, diligent weed control will be necessary. Remove weeds as soon as you can identify them. Sometimes you will have to wait until they flower to be sure.
And all of my sources recommended re-seeding every year with annual wildflowers for the most vivid display. Annuals only live for one season and have to reproduce (i.e. flower) as much as possible to ensure the survival of the species, so they produce a lot of flowers.
This isn't a comprehensive list of all of the problems that can occur, but these were the issues that seemed to apply to the garden beds I have directly observed.
Now, armed with these tips, I am going to tackle a couple of garden beds this fall and I hope others too can create vivid, satisfying displays next year and each year after.
Further really helpful information about this subject can be found in CSU Factsheet 7.233 Wildflowers in Colorado.