People care about local, fresh, healthy food and want to grow at least some of their own for themselves, their families and friends.  For those with short and cool growing seasons (mountain areas), it’s especially important to find ways to maximize the growing season to provide home grown food for a longer period of time.  Combining season extension techniques and adapted plant varieties will allow mountain counties to become more food secure.
When we refer to “Season Extension” we are usually talking about growing food under some type of cover to moderate temperatures, especially to provide a warmer environment so that the plants under the covers aren’t damaged by the last and first frosts of the season.  To be more specific, season extension covers perhaps allow us to get a harvest of warm-season crops that we typically cannot grow in the mountains and to plant any crop earlier and harvest later than if we grew the same crop(s) without any frost protection cover.  The photo below shows how this works. 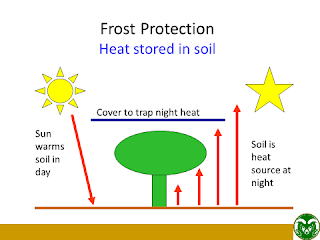 There are also other cultural ways to extend our growing season beyond our average frost-free season.  Cool-season crops can be planted out before our last frosts and will produce even better quality if allowed to mature after our first frosts.  We can choose cold-tolerant, short-season varieties of crops.  We can transplant young plants of some food crops that we started ahead of time inside rather than direct seeding.  We can plant in succession so that we have harvests of certain crops over a longer time period as shown below in the photo of lettuce planted 2 weeks apart under cover. 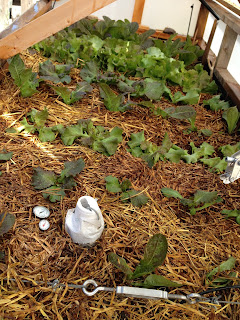 We can create and take advantage of existing microclimates by how we locate and orient our gardens—a south facing, slightly sloping site protected from prevailing winds is ideal.  We can raise soil temperatures early in the season by planting in raised beds, adding organic matter and using dark mulch.   We can also provide heat sinks (thermal mass), like stone, concrete, containers of water.  The garden in the photo below is all raised beds facing south with a wind block provided by trees to the Southwest. 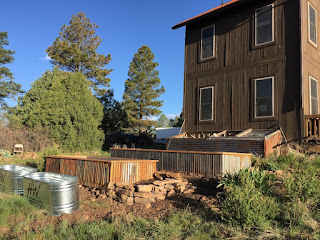 There are many types of covers we can use to provide protection from frost for vulnerable plants.  Hot caps such as cloches, ‘walls of water’, milk jugs, 2 liter bottles, etc. are used over individual plants and larger covers lain over rows of plants, or attached to structures such as cold frames, hot beds, low tunnels, high tunnels and greenhouses. 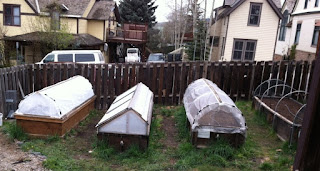 San Miguel Basin Extension has been conducting season extension trials since 2011.  Our raised bed trial beds are located in Telluride at 8750’ elevation.  Telluride has about a 60 day frost-free growing season from mid to late June till the end of August/early September. In this blog post I will give you a summary of what we have learned about growing under the different season extension covers we have chosen.  In a later blog post I will tell you about the different crops we have grown under cover and how they have performed.
The materials we chose for our covers are (left to right, in the above photo):  Agribon Ag30, a medium weight (0.9 oz/yd2) spun-bonded polypropylene row cover fabric; Insulated 5mm twin-wall SolexxTM XP paneling, a flexible polyethylene cover, fitted with an automatic vent opener;  Dio-Betalon (Tuffbell 3800N) polyvinyl alcohol film and no cover for our control bed.
In our 7 years of growing trials we have accumulated a lot of data but what we’ve learned in a nutshell is that compared to no cover (the control), any cover improves the growth and yield of most crops and gives protection against insects, wind and harsh sunlight.  For warm-season crops (beans, summer squash) most have performed best under SolexxTM and Dio-Betalon.  Cool-season crops (winter greens, lettuces, carrots and broccoli) haven’t done as well under SolexxTM as the other covers.  However, SolexxTM, has yielded earliest cool-season crops making it a good choice to get extra early harvest before it gets too hot in the summer.  Winter greens did best in the SolexxTMbed.  The SolexxTM bed gets the most salt buildup in the soil because it doesn’t allow any rainfall through.  The Dio-betalon cover gives early and good yields of all crops and so is a good multi crop choice.  Dio-Betalon has yielded the best quality, especially colored lettuces.  Cool-season crops do very well grown under the 30% row cover fabric.  It creates the most humid environment, the lushest vegetative growth and helps with seed germination.  However, the moist environment also promotes disease.  For some cool season crops planted at the recommended time (not extra early) the only benefit of covers is insect and critter control, shade and wind protection. 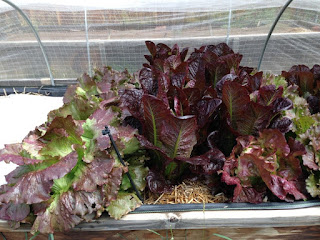 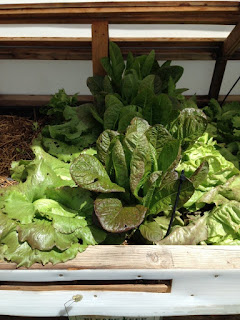 The photo above shows the difference in color of the same varieties of lettuce grown under Dio-betalon compared to SolexxTM .
Be sure to look for the follow up article on the crops we’ve grown in our season extension beds.  I’ll be glad to answer any questions you may have.  Yvette.Henson@colostate.edu