by Yvette Henson
Earlier this year, March 22, I wrote an article for this blog about season extension and our High Altitude Season Extension research trials in the San Miguel Basin (San Miguel and West Montrose Counties in SW Colorado).  In that article, I said I would post a follow up article about the different crops we have grown under covers and how they have performed.  This is that article.
We have been conducting season extension trials since 2011.  Our raised bed trial beds are located in Telluride at 8750’ elevation.  Telluride has about a 60 day frost-free growing season from mid to late June till the end of August/early September. In the previous blog post I gave a summary of what we have learned about growing under the different season extension covers that we chose and best uses for each cover based on how crops perform grown under them. 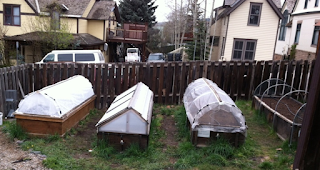 The materials we chose for our covers are (left to right, in the above photo):  Agribon Ag30, a medium weight (0.9 oz/yd2) spun-bonded polypropylene row cover fabric; Insulated 5mm twin-wall SolexxTM XP paneling, a flexible polyethylene cover, fitted with an automatic vent opener;  Dio-Betalon (Tuffbell 3800N) polyvinyl alcohol film and no cover for our control bed.  Initially, we layered Dio-Betalon and 30% Row Cover but eventually we added another bed and separated the two layers.
In 2011-2012, 2012-2013 and 2014-2015 we grew different greens ‘through’ the winter.  Eagle County and Teller County collaborated in the first two seasons by growing the same things along with us.  We trialed several different varieties of spinach (Spinacia oleracea), kale (Brassica napus), lamb’s lettuce (Valerianella locusta) and arugula (Eruca sativa).  In 2011, we planted in mid-September, got a very small harvest before the holidays and then started harvesting again in late February or early March.  We learned that mid-August is the better planting time because the plants get more time to establish and we get a better pre-holiday harvest.  All the greens did best under the Solexx cover followed closely by the 30% Row Cover + Dio-betalon layered.  Kale didn’t overwinter well.  Spinach and arugula produced the most with only some winter damage.  The lamb’s lettuce was the hardiest green and the earliest to mature.  It was also the only green that didn’t seem to be affected by day length and temperature.  The other greens would stop growing when the days were the shortest and coldest and would resume growing when days began to get longer in late February. 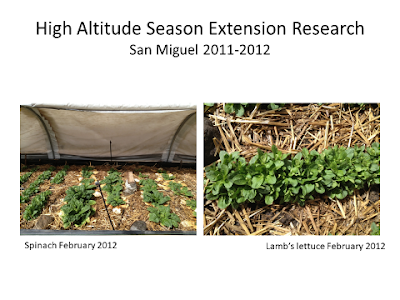 2012-2014 we grew 7 replications of many different lettuce (Lactuca sativa) varieties at 3 locations. The first year we planted seed in mid-May but by the 3rd year we had started even earlier – by the 3rd week in April.  We tried succession planting (2 weeks apart) and overwintering. Overall, 30% Row Cover + Dio-Betalon layered together gave the highest yield but Dio-Betalon alone gave the best quality.  The succession planting worked really well and give a longer season of head lettuce rather than a single large harvest.  We found that the lettuce needed to be about half way mature to overwinter well.  Lettuce loves growing in the mountains!  If you aren’t growing head lettuce give it a try next season. 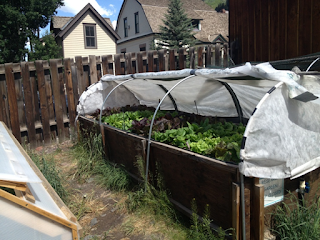 In 2015 we grew 4 varieties of Open Pollinated carrots (Daucus carota subsp. sativus).  We direct seeded mid-March and harvested mid-June.  We could have harvested earlier.  We got the best yield and quality of carrots grown under Dio-Betalon, followed by 30% Row Cover.  Both of those covers get better light transmission and don’t get as hot as our Solexx bed.  So, it makes sense that carrots wouldn’t grow as well under Solexx since carrots are cool season crops.  An interesting fact about one of the carrot varieties we grew is that ‘Pusa Asita’ carrots are a short day variety that does well in the cool season of hotter climates.  Short season carrots don’t do well in the mountains.
2016, we grew 3 varieties of Open Pollinated broccoli (Brassica oleracea var. italica).  We chose varieties that would produce both heads and side shoots to extend the harvest.  We started the plants from seed and grew them out to seedling stage before we planted them out in mid to late May.  Like carrots, broccoli is a cool season crop so it grew better under the more ventilated covers.  The Dio-Betalon cover produced the earliest and highest yield of heads and the 30% Row Cover produced the highest yield of shoots.  We found we preferred to eat the side shoots rather than the heads—they were tenderer.  Broccoli grows fine with no cover, in fact no cover produced better yield than the Solexx cover.  However, covers give the advantage of an earlier harvest and protection from cabbage worms, etc. 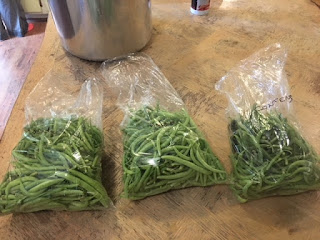 In 2017 we grew 3 varieties of bush green beans (Phaseolus vulgaris).  We also grew a short trial of bush green beans in 2011 and a full trial in 2013, along with summer squash.  The results of the 2017 bush bean trials compared to the 2 earlier trials was so different and we are still trying to figure it out.  But in a nutshell, bush beans grow much, much better under cover than with no cover!  They are warm season crops so the additional heat that some type of cover provides is definitely needed to grow them in the mountains.
This year we are growing 3 varieties of day-neutral strawberries (Fragaria × ananassa).  It has been a challenging year to try to establish strawberries because of the drought we are experiencing.  We will continue this trial in 2019 after we overwinter the plants under covers. 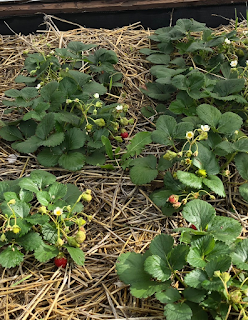 To summarize and remind you of what I wrote in the March article, growing under cover compared to growing in the open without cover improves the growth and yield of most crops and gives protection against insects, wind and harsh sunlight.  For the warm-season crops we’ve grown (beans, summer squash) most have performed best under Solexx and Dio-Betalon or 30% Row Cover + Dio-Betalon layered.  Cool-season crops (winter greens, lettuces, carrots and broccoli) haven’t done as well under Solexx as the other covers.  Sometimes they even grow better under no cover than under Solexx!  However, Solexx, has yielded earliest cool-season crops making it a good choice to get extra early harvest before it gets too hot in the summer.  It is also better at holding moisture in the soil than the other covers but the humid environment can contribute to disease.  Solexx also tends to get salt buildup in the soil because it doesn’t allow any rainfall through to leach it out.

The Dio-Betalon cover gives early and good yields of all crops and so is a good choice for both warm season and cool season crops.  Dio-Betalon lets in a lot of light and has produced good quality crops, especially colored lettuces.  We’ve found the soil under this cover can dry out quickly.  Cool-season crops do very well grown under the 30% row cover fabric.  It creates a humid environment, the lushest vegetative growth and helps with seed germination.  However, the moist environment also promotes disease.  Dio-Betalon + 30% Row Cover layered increases the benefits as well as the drawbacks of either cover used alone.  Both together let in less light.  We don’t grow under both layers anymore.  For some cool season crops planted at the recommended time (not extra early) the only benefit of covers is insect and critter control, shade and wind protection.
I’ll be glad to answer any questions you may have about growing under cover and/or the varieties we have grown.  Contact me at Yvette.Henson@colostate.edu