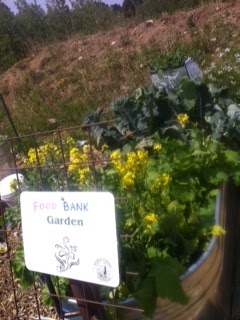 by Sandy Hollingsworth
Sometimes one’s love for gardening blossoms into a way to contribute to your local community. In Gilpin County there is a food bank for those living food insecure. It was started in 1995 by county Human Services and need has grown more rapidly in the past four years to now serve an average of 70 families a week. There is also a weekly summer lunch program for children, averaging 50 monthly, to come and select food from items displayed in a welcoming way. Like many food pantries fresh produce is lacking among the donated foods. To help address this need, a group of volunteers decided to install new beds at the nearby CSU Extension community garden located at 9200 foot elevation, to plant, tend and harvest produce each week. An experienced gardener already volunteering for the Food Bank recruited a Colorado Master Gardener and three waterers who set up a schedule to insure the gardens were nurtured throughout the growing season. 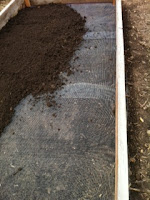 In May we started by constructing two raised beds with wire hardware cloth stapled to the bottom to keep critters from tunneling in from below. This means the soil in the beds is only 6” deep but it has worked great for growing more shallow rooted vegetables like arugula, chard, spinach, beets, turnips, carrots, snap peas, snow peas, kohlrabi, broccoli raab, kale, lettuces, dill and radishes. We started out by doing a soil test by the Colorado State University Soil Lab and learned that we needed to add nitrogen and more compost. We added alfalfa pellets, ammonium sulfate, blood meal and compost at rates suggested by the CSU lab to improve the soil over a few seasons. After amending we started planting seeds in half of the beds in early May then succession planted throughout the season until early September. I’d started seedlings of cucumber, chard, kale, cherry tomatoes, and lettuces at home which were added to the beds after the soil had warmed. We used floating row covers to deter critters and keep the plants protected from the wind and intense summer sun plus to regulate soil moisture and temperature. 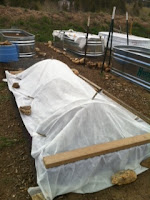 In addition, the community gardens acquired large metal troughs and we were assigned two. One we drilled extra drainage holes in the bottom before filling with planting mix and the other we used as is with an open small drain plug near its bottom. The latter we designated to grow several varieties of small potatoes and the other was planted with deeper rooted vegetables like cherry tomato and broccoli, longer carrot, more beets & raab, plus onion and vegetables we weren’t sure critters would gobble like baby bok choy, cilantro, butter lettuce, yellow squash and cucumber. For fun and to entice pollinators we added marigold, petunia, annual vinca, and red salvia (the hummingbirds relished that). The real pollinator attractor ended up being the broccoli raab flowers. 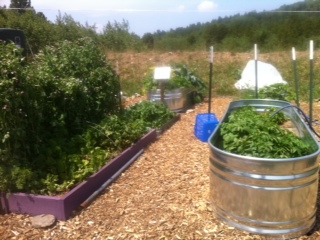 In mid-June we were blessed with a large donation of beetroot, celeriac, and red Sorrel plants from the Ace Hardware garden center in Nederland. Luckily, we were given an unused plot to plant these after amending and weeding. This plot we did not install a raised bed or hardware cloth but did put chicken wire fencing around it and bird netting on top to deter browsing critters. This meant each planting area was set up a bit differently for our own demonstration comparison of methods.
All of this made for a bountiful harvest of cool season vegetables agreeable to being grown at high altitude in a shorter growing stretch. By late September we have harvested over 130 pounds of produce for the Food Bank to give people wanting some fresh vegetables to have raw or to cook. 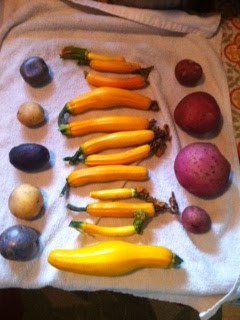 Of course, as with all gardening, we have our list of lessons learned. Given that we had an ever-expanding garden with gifts of starts and seeds, plus since we had not gardened together as a team, our garden was not as planned out as it could have been. We added starts as they arrived in space available. This made harvesting less efficient with lettuce, chard, greens and root vegetables in multiple locations instead of grouped together. It also meant we didn’t group longer producing vegetables together and had some height competition. The broccoli grew so large it shaded out the cucumber and squash starts which were admittedly poorly placed in hindsight.
Another lesson was that hardware cloth was impenetrable to critters so the in-ground bed without it got hammered and many of our beets and radishes in that plot were taken. Stomping on the underground tunnels to collapse those ended their shenanigans. Also, the fencing helped once we had added it later but it would have been best when we first planted. The floating row covers worked great if we had the edges well tacked down with metal poles, lumber, rocks or clips, so that there were no inviting openings. However, the hail poked holes in them followed by the wind tearing them so that the swiss cheese looking covers let in pollinators (Yae!) but also voles (Boo!). Replacing them with new covers and being sure to tuck in edges prevented more intruders which had already dug up most of the carrots and then beets plus clipping off the pea vines just because they could. Drat! 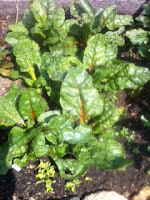 The potato trough didn’t drain enough so the soil was muddy mid-season and some plants rotted rather than produced many potatoes. Maybe hilling potatoes too deep in the trough and enthusiastic overwatering added to the problem. We also found it a challenge to dig downward bending over the trough to harvest.
All in all, it was a fun, rewarding season with a wide variety of produce harvested and given to the Gilpin County Food Bank. We look forward to future years when we will plan the layout of our garden beds better, continue to amend to reach ideal soil nutrients according to the soil test, relocate some plants to better depth beds, plant vegetables like squash and cole crops in ground beds since critters don’t nibble them to reserve space in the troughs for critter enticing vegetables.
We also liked swapping stories with other community gardeners about what crop varieties work best. We’ll always need a team of volunteers to tend the gardens to succeed in growing fresh produce and help feed residents of our community. 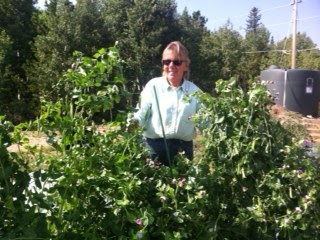