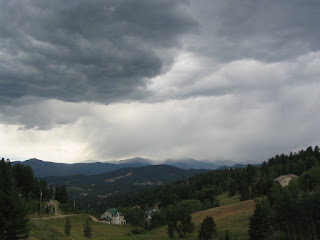 If you haven’t lived in Colorado or the Southwest for very long, you may think that monsoons only occur in India or tropical areas.  And even through the late 1970s, there was serious debate about whether a monsoon truly existed in North America. But we do have actual monsoons here -- they are defined as large-scale wind and rainfall shifts in the summer.
The monsoons bring beneficial summer moisture to the Southwestern states. We count on the monsoons to arrive sometime in early-mid July here in the mountains, relying on the cooling clouds building in the afternoons, and the brief or torrential rains to water our gardens and wildflowers.  But, the monsoons have a dark side to them as well, bringing dangerous lightning and the potential for flash floods.  And this year, the monsoons have been late to the table, and have not brought that much rain (at least so far to Gilpin County).

How do monsoons work? As the summer heats up, the land warms faster than the Pacific Ocean. This temperature imbalance becomes large enough that a change in the high and low altitude atmospheric movement occurs.  The warm land creates low-pressure zones as hot air rises. Once this pattern establishes across the region, the winds shift to fill in the vacuum,  carrying with them moisture from the Gulf of Mexico.

The monsoon is variable – in timing, the amount of rain, and the amount of lightning.  Long-term monsoon researchers have found, though, that the overall character of the monsoon has not changed in the past 100 years, according to Eric Pytlak, Science and Operations Manager at the National Weather Service in Tucson.

Some things that can cause a stronger monsoon season include a La Niña event (it brings increases in easterly air flow which tends to bring more moisture from the Gulf of Mexico). An active Madden-Julian Oscillation (MJO) in the tropical Pacific Ocean can also increase the strength of the monsoons.
Two factors causing a weakened monsoon include cooler temperatures in the Midwest and an above-average snowpack in the Rocky Mountains.  This year (2016), we are in an El Niño cycle, and had an above-average snowpack, so perhaps these have contributed to our lack of rains (so far).

The role of climate change on the strength of the future monsoons is unclear. The best educated guesses come from 19 general circulation models, or GCMs, used in the 2007 Intergovernmental Panel on Climate Change (IPCC) Fourth Assessment Report. Only two of the models simulate monsoon precipitation, and one predicts an increase in future rains while the other predicts a decrease. The model that shows an increase in activity factors heavily on the likely increase in the temperature differential between the land and the Pacific ocean. For the model with suppressed monsoon activity, the higher air temperature is thought to increase the dew point, causing less likelihood of rain. Joellen Russell, assistant professor of biochemical dynamics at The University of Arizona says that she bets that the monsoon will strengthen (in other words, she believes the first model more).  But, it may take years to understand the links between increasing global temperatures and the monsoon activity.