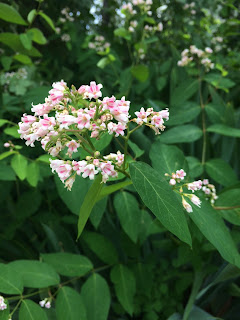 I inherited an interesting garden with a house purchased a few years ago.  It was a cottage style garden planted with an abundance of bearded iris, hostas, and vinca, along with specimen perennials and flowering trees.   In an effort to encourage new growth between the existing plants, I removed weed barrier fabric from beneath a heavy layer of mulch, and then waited to see what plants would emerge from the bare soil.  Would seeds sprout from native wildflowers growing close by? Would weeds take over? More importantly, would I be able to distinguish between weeds and wildflowers?
In David Whiting’s The Science of Gardening, landscape weeds have many definitions, including: plants growing where they are unwanted, visually unattractive plants, plants that pose a health or safety hazard, and plants that displace more desirable plants in the garden.  The following spring, a variety of plants emerged, as well as numerous weeds.  I identified the first two types of weeds and sought professional help with the other types from botanist Karen Vail.  She identified my plants, pointing out native versus nonnative plants.  Then, except for one truly invasive cultivar, she left it to me to conclude whether I wanted to consider the remaining plants weeds or wildflowers. I chose the prettiest and hardiest looking native plant to investigate first: spreading dogbane.
Spreading dogbane (Apocynum androsaemifolium) is a bushy perennial that grows up to 2 feet tall and has opposite, oval leaves on reddish stems.  It produces small bell-shaped slightly pink flowers that flower for several weeks in the summer and is native to most of the US.   It exudes a slight lilac scent and produces a milky sap when a stem is broken.  This sap and the root contain toxic substances that Native Americans used for medicinal purposes.  Related to milkweeds, dogbane was once thought to be a host plant to monarch butterflies.  It supports bees and other beneficial insects and attracts a variety of butterflies to the garden.
Although pretty and growing in the right places in my garden, spreading dogbane’s toxicity might be a health hazard, and therefore might classify it as a weed.   Its common name means “poisonous to dogs” and the translation of its genus Apocynumis “Away dog!”   The milky sap contains a chemical that is toxic to dogs as well as to livestock and other humans, and it can cause blisters on the skin.  Its roots are also toxic.  Fortunately, I am not sensitive to the sap, and my dog (who does not dig but loves to eat grass) has no interest in eating the plant.  “Health hazard” can be ruled out. 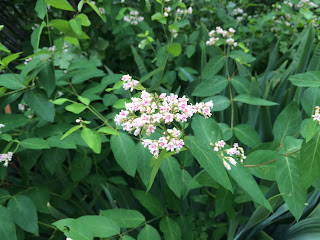 Spreading dogbane might also be labeled a weed if it spreads too aggressively from its underground rhizomes. It is considered a nuisance weed in some parts of the US, where it successfully outcompetes with other plants.   It will thrive in both sun and shade and will grow in a variety of habitats.  I may find it grows too aggressively in my garden, but so far, it is nicely filling in the empty spaces.
Weed or wildflower?  For now, I am classifying spreading dogbane a wildflower. I like that it is a pretty native that attracts pollinators, and it is easy to pull when I see it crowding another plant.  And because it is a native plant and not a noxious weed, I get to choose on the matter. As a bonus, its leaves turn a bright yellow in the fall, providing visual interest in my garden for several months.
A long time Steamboat resident and casual gardener, Vicky Barney is a member of the Master Gardener Class of 2011.